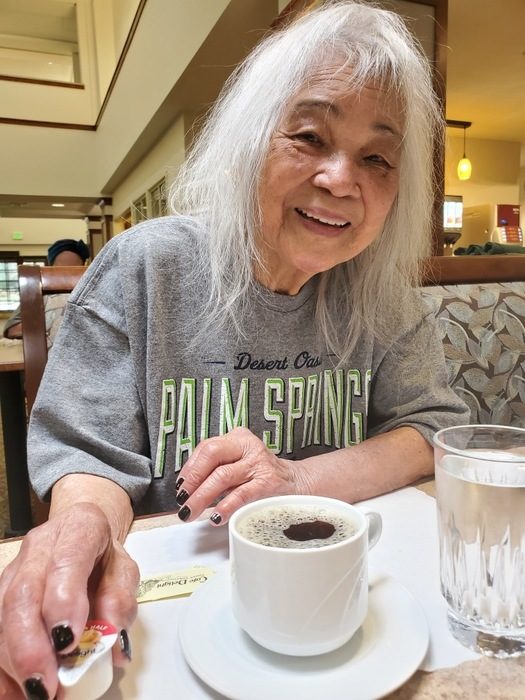 It is with profound sadness we announce the passing of our loving and devoted mother, Elena Estacio Ramilo.

Elena, 89, passed away sleeping peacefully at home in Mill Creek, Washington on March 4, 2020 due to natural causes.  She was born Elena Aquitania Estacio on July 6, 1930 in Rosario, La Union, Philippines to Pedro and Romana Estacio.  She was married for 55 years to Owen Militar Ramilo, who preceded her death in 2012.  She was the beloved mother of four children, Carlos, Maria, Manuel, and Ditas.

She was the third of five children, growing up in a small rural town just south of Baguio in the Philippines.  She recalls her childhood as cheerful, looking up to her older siblings, sister Aurelia and brother Rosalio, and helping her parents take care of the younger siblings, brother Francisco and sister Susan.

Elena earned a bachelor’s degree from Far Eastern University in 1952, graduating with a BA in Education.  After college, she taught English at Makati High School in Manila. During this time, she met Owen, whom she would marry on December 29, 1957.

The family grew as the four children were born and Owen and Elena worked toward their dream of coming to America.  Owen took jobs at U.S. air bases across Asia and the Pacific working as an aircraft mechanic before arriving in the U.S. mainland in early 1968.  Elena followed with the children, arriving in Seattle on December 4, 1968.  Over the next two decades, Elena embraced the life of a suburban mom and homemaker while assimilating into a new culture and learning and growing in a new faith.  She was especially active in the fledgling First Filipino Baptist Church in Carson, California.  If ever Elena was troubled by any of these challenges, she never showed it and went about her life with purpose, humility, and steadfastness.

The family lived in the Chicago suburbs during the 1970s and in Carson, California during the 1980s and 1990s.  After Owen’s retirement, they moved back to the Seattle area in 1999.  She described her later years as plentiful and joyful, relishing the opportunity to watch and contribute to son Carlos’s family grow up and have families of their own.

Elena’s love for her family instilled in her children values such as faith, hard work, perseverance, resourcefulness, and gratitude.  Her favorite Baptist hymn, “To God Be the Glory”, reflects her gratefulness for all God’s blessings and glory.

Elena will be dearly missed and forever in our hearts.  A celebration of her life will be held at Chapel of the Resurrection Funeral Home, 16300 112th Avenue NE, Bothell, Washington, 98011 on Friday, March 13, 2020, with a 12 noon viewing and 2 pm ceremony.