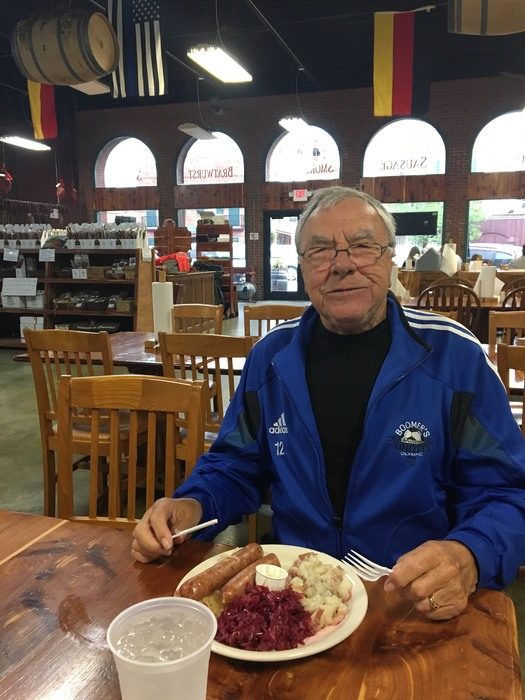 Gunther Baumler, 84, passed away peacefully at home on June 13, 2019, surrounded by his loving family.

He leaves his wife of 42 years, Tana Gayle (Lawson) Baumler of Butte, Montana; his son, Gary Baumler (Donna); his daughters, Karin Price (Mark Wall); Tessa Curtis (Leif); Keesha Laws (Derek); seven grandchildren, Adam and Amanda Paffhouse, Madrid and Winsor Curtis, Taylin, Paisyn, and Kameya Laws; one great-grandchild, Ashton; his sister, Waltraut Walkely of Dunedin Florida; nephew David Wilson; nieces Cathy, Ulrike and Rhonda Wilson; sister-in-law Eva Baumler (wife of deceased brother Heinz) of Nuremburg, Germany; nieces Christina of Nuremburg, Germany and many loving nieces and nephews on Tana’s side.
Born and raised in Nuremburg, the 2nd born son of Mina and Johan Baumler, Gunther experienced the hardships of  WW II Germany. His father was sent to the Russian front when Gunther was very young and never returned, presumed to have died in battle. Gunther and his brother, Hines who were inseparable, had many adventures as well as the responsibility to help feed the family during those years post war. They encountered not only hunger and lack of supplies, but ultimately severe bombing of their city resulting in the death of many in the community.
In 1956, at age 21, Gunther moved to Canada where there was the promise of jobs for immigrants after the war. He worked various jobs, including Northwest Territory, the Billionaire’s Club and then as an orthopedic mechanic which was his trade @ a hospital in Calgary Canada. He married Ingrid Enzmann in March of 1959 in Calgary. They were married for 13 years and had two children, Gary and Karin. In 1960, they moved to Massachusetts and stayed until 1964 where he worked as a tool and dye mold maker. After living a few years in California, Gunther and his family settled in Seattle and he began his own tool and dye business. Later, he worked for Leviton Telcom for many years until he retired.

In December of 1977, Gunther and Tana were married. They had two daughters, Tessa and Keesha. They lived in Bothell for 37 years before moving to Snohomish where they resided for the past 5 years.
Gunther loved to travel. He and Tana took a trip to Hong Kong for their honeymoon and found that they were compatible traveling partners. Over the years they enjoyed many family adventures all over the world together. An avid soccer player, Gunther incorporated soccer into family life, by coaching rec leagues, his daughter’s select teams, and player coach at Shoreline Community College. He also fought to allow for the first girl to play on the men’s soccer team in Shoreline several years ago. Gunther had a passion for music. He loved playing the saxophone and enjoyed playing in several jazz groups through the years. He also loved to play chess and volunteered teaching youth to play.  Most importantly, Gunther loved his family. He incorporated all of his interests into family life and loved spending time with his grandchildren, keeping them in line until the end.
Gunther was overtaken with PTSD Dementia his last several years. But, he was blessed with clarity the last couple of months of his life and was able to enjoy his family before his death.  We will cherish his life and will love and miss you forever!

Memorial gifts may be made to Bethanya Vision Trust, 914 164th ST SE, Ste 12 203 Mill Creek, WA 98012. The Baumler family is active in supporting underprivileged children in Southern India and your contributions are appreciated.